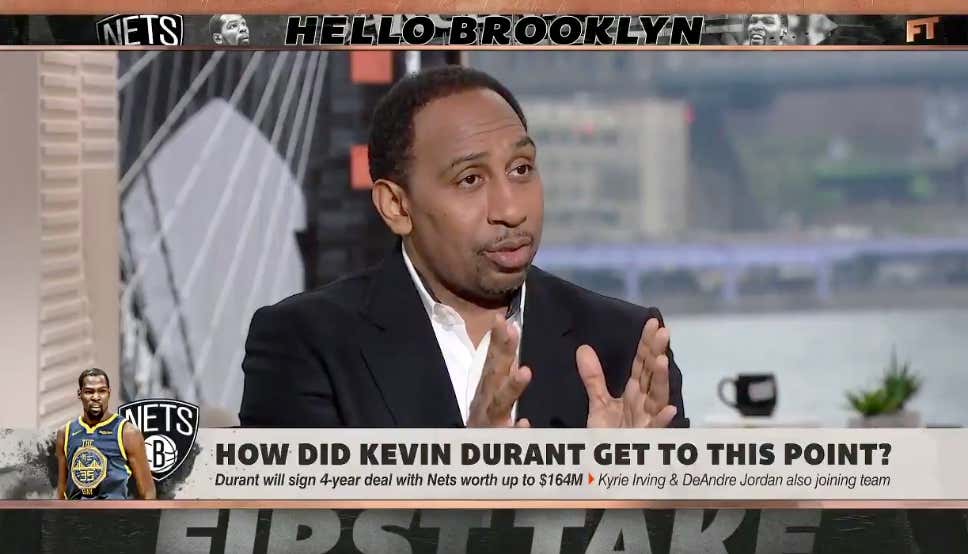 OK we have a lot to digest here this morning. Once again Stephen A found himself in quite the pickle regarding Kevin Durant. He went on TV today and gave this blazing hot take about how things went down in OKC before KD even got to the Warriors

This is sort of similar to what Royce Young said at the time, which he then had to backtrack on once Durant called him out on it. A juicy little nugget for sure that makes Durant kind of look like the snake many people make him out to be. Well because we know Kevin Durant is listening/watching to everything with his name in it, he of course put a stop to this nonsense and made Stephen A apologize on national television

You just hate to see it from the GOAT. Remember, this isn’t the first time these two have had a bit of an issue, Durant pretty much said Stephen A is full of shit way back in 2015

that led to one of the greatest moments in television history

We all know Stephen A says outrageous shit all based around “what he’s been told”. It’s a great strategy to never haver to take responsibility for it because he’s not saying it, he’s just telling us what someone told him. If anybody is lying, it’s THAT person. A brilliant strategy for sure. Pretty funny though that he had to backtrack almost immediately after saying that shit on TV. A sad day for the Stephen A Smith business.

This also isn’t the first time we’ve seen Durant expose these dudes for saying whatever they want on their talk shows. Who could forget what he did to Chris Broussard earlier this year

You may think this makes Durant soft for actually caring what these dudes say, but I actually find it pretty hilarious that he keeps dunking on these guys and makes them bend the knee. You should know by now that if you’re going to talk about this man and even consider lying or spreading something that may not be true, you’re going to hear about it and you’ll be forced to apologize to millions of viewers. Hate Durant if you want, but at least he’s doing his part to expose the bullshit.